Luna started her trip back home on 14 August, after having spent two weeks in Tallinn. We had enough time to visit the old town and discover its hidden corners. We also went on a daytrip to a nearby lake and even attended a birthday party. Of course it was Luna who got the most attention everywhere we went. At the birthday party it seemed as if Luna was the birthday girl. She took over the biggest sofa and got everyone's attention. But these days were just a little break from hitchhiking, it was time to return home.
So on the morning of 14 August we hit the road again. With our thumbs up in the air. Even after our two-week stopover, Luna realized immediately that once again it was time to ask random drivers to take us a little bit closer to our destination. So still and quiet, sitting behind our backpacks, it was hard not to confuse her with the luggage. That day we reached the south of Estonia. We planned to spend the night there in the country house, and to continue the following morning.

They say that the trip back home always seems quicker. And this is exactly what happened to us on our first week returning to Spain. Just three days had passed since we had left Tallinn, and we were already in Kezmarok, Slovakia. There we stayed with Maros, a friend we had first met two years ago in Malaga, where he was doing his Erasmus. We spent two days there and took advantage of the chance to leave the backpacks in the house and go to discover the impressive mountains around Kezmarok. As usual, whenever Luna is off the leash and she has huge green fields in front of her, she started running like crazy, jumping into puddles, and disrupting the peace and quiet of the nature around us. To see her was to feel her happiness. The happiness of a sweet girl who just wants to please everyone.

On 20 August we reached Vienna. When we were hitchhiking in a gas station in Bratislava (about 70 km from Vienna) the dusk was falling upon us. We started to have doubts whether we would reach our destination that night. Suddenly, a blue van stopped. The driver had no idea where the capital of Austria was, and his English vocabulary consisted of no more than ten words. He showed me the GPS to see his route and it turned out that it did pass through Vienna. So we got in the car and on several occasions I asked him if he could leave us inside the city because it was too late to keep on hitchhiking on the highway. With a puzzled look, he nodded without saying a word. In the end, he didn't take us to Vienna. He dropped us off in a gas station on the highway 5 km from the city. It was already night and it was pouring rain. Luna, as always, passed the time sitting next to us without any complaints. We didn't know what to do. After considering the few possibilities we had, we decided to call Michael, the couchsurfer who was waiting for us.

—Hello, Michael, it's Daniel from Couchsurfing.
—Hi, Daniel, are you already in Vienna?
—Ehh, not really...One guy left us in a very bad place. It's a gas station with an Ibis hotel next to it. We know that we are somewhere 5 km around Vienna. Do you know how to get out of here?
—I don't really know where you are, guys. But ask for the address in the hotel, and then I'll come and pick you up.

It was such a relief to hear these words. I hugged Anna and Luna and said: “What would we do without couchsurfers?” Michael arrived in no time and took us to his house, where his girlfriend and friend greeted us. Luna was welcomed like a princess. They allowed her to go on the sofas and Luna showed her gratitude by licking them endlessly. The next day we went sightseeing, as Vienna is full of impressive historical buildings and lovely parks.

On Saturday afternoon we made it to Innsbruck, a lovely town surrounded by mountains. Yet another couchsurfer greeted us with arms wide open. Franzi, an attentive girl with a big smile, saved us from having to camp in chilly Innsbruck. Luna was in seventh heaven when she met her and her friends and roommates. So many new people to greet! She could not get enough of all the cuddling and caressing. The next day we decided to go hiking to take advantage of the breathtaking mountainous scenery around Innsbruck. Luna loved that hiking day. Nothing makes her happier than seeing endless fields in front of her. She greeted everyone who crossed her path, approached goats and cows with curiosity and caution, and ran aimlessly around the fields, as if the trip has just started.

The next day Zürich was waiting for us. It only took us two rides to get there. The first driver was a young Austrian, happy to meet hitchhikers to keep him company on his long journey. The second one was a German gentleman who had been living in Zürich for quite a while. When he stopped the car, we weren't sure whether he had stopped for us. It was a new sports car that pulled over two metres away from us. I approached the car out of curiosity, and the driver signaled me closer with his hand, while reorganizing the things inside the car with the other hand. He turned out to be a very nice man who also used to hitchhike in his youth. Not only did he take us to the Swiss capital, but he also gave us a little tour, showing us the main tourist attractions. And when he said goodbye, he did so with 20 francs in his hand. "In Switzerland you're going to need this".

We spend two days in Zürich, once again couchsurfing. This time our host was Mary, with whom we walked all over the city, even though the steady drizzle didn't let us enjoy ourselves as much as we would have liked to. But anyway, we had a great time, and everyone who approached Luna in this city got their share of love from her. But we had to continue, Spain was not so far anymore. So on 27 August we returned to Geneva. This was the first city that we visited twice on our trip. Ahmed, the guy who had invited us to spend a day on his boat the first time we were in Geneva, received us in his house again, together with his sweet family. Luna ran up the stairs and entered the house as if we had never left. She remembered everything. The next morning Ahmed kindly took us to the entrance of the highway in the direction of France.

We were having a streak of good luck. During the last week and a half, we had set up the tent only a few times. We had almost always had a roof over our head, whether thanks to old friends, new friends we made on the road or people who offered to host us through Couchsurfing. Also, the drivers who gave us a lift were all friendly and nice people. And they were all delighted to see Luna. Everything seemed like a piece of cake. There were moments when it didn't feel like a real adventure anymore. However, when we got to France, a country that is normally a paradise for hitchhikers, we ran out of luck for a couple of days.

A friendly French woman gave us a ride to Montpellier. While we were still on the road, she offered us to stay in her house for the night. The last couple of days had been quite exhausting, so the thought of being able to sleep with a roof over our head was really appealing. But things didn't work out as planned. When we got to Montpellier, she asked us to wait for her in her van because she had to take care of some business with her friend. She said she would be back in five minutes. An hour had passed, and there was still no sign of her. Finally, his friend came to talk to us, though he didn't speak a word of English. In a fast-paced French and with no manners he told us that his friend had some problems and that there was no point in waiting for her. So we took our backpacks and wandered around the neighborhood. It was midnight and we were in the centre of the city. Luna walked beside us, unaware our concerns. For her, being next to us was all she wanted. The good news was that we had already been to Montpellier before, and we knew the city a little bit. So we decided to sleep in a big badly lit park that we remembered from our last visit. It was right in the city centre, but we saw other people sleeping there, some even in a tent.

We woke up early, cuddled up with Luna. Even though we had spent the night without the tent, and with people and dogs all around us, Luna had never left our side. This had probably been the worst experience of our trip (not because of the dangerous situation but mainly because of the disappointment), but it made us love our staffy even more. We are sure that if she were a human being her boundless love would be changing the world.

The next day, 31 August, we arrived in Toulouse. We had left the bad experience from last night behind us. In Toulouse another couchsurfer, Thierry, was waiting for us to spend a couple of days in his house. As soon as Luna saw him, she jumped on him to give him some kisses. This love at first sight was mutual, Thierry fell in love with her too, "Now I'm going to want to get a dog," he said. We spent two wonderful days discovering Toulouse, the so-called Pink City (even though Anna insisted that it was actually orange, not pink).

Two days later we reached Barcelona. Jordi and Olga, the amazing couple who had hosted us on our way to Estonia, opened their doors to us once again. We were all happy to see each other again. The mutual fascination between Luna and the cat Baloo, that we had witnessed almost two months ago, continued, leaving us all flabbergasted. “I'm sure if they spent a couple of weeks more together, they would end up being completely inseparable”, said Olga, looking at the two playing with each other, each one in their own way.

A few days later we returned to Malaga. We tried to keep on hitchhiking from Barcelona, but soon we gave up. It was a useless effort, and we didn't want to end the trip with bad vibes. So that's why we decided to use carsharing. The last driver dropped us off in Malaga on September 6, exactly two months after we had started the trip. Luna and I wanted to continue. This had been a great experience and it had taught us a lot. Why not continue? Our staffy wanted to keep on spreading love around the world, debunking myths about dangerous dogs. Well, for now the adventure is over, but maybe one day we will start another one, called Luna on the road 2. 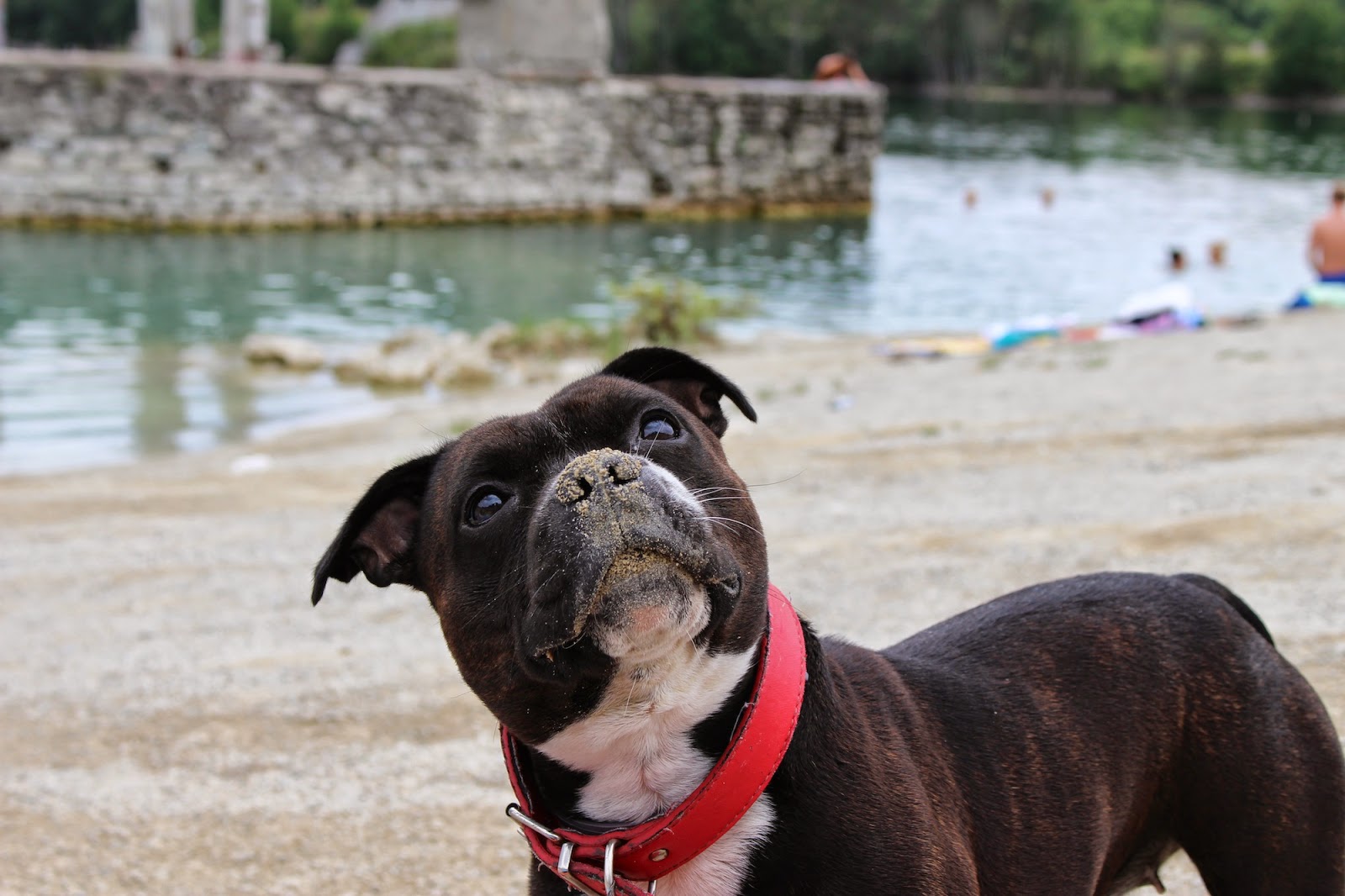 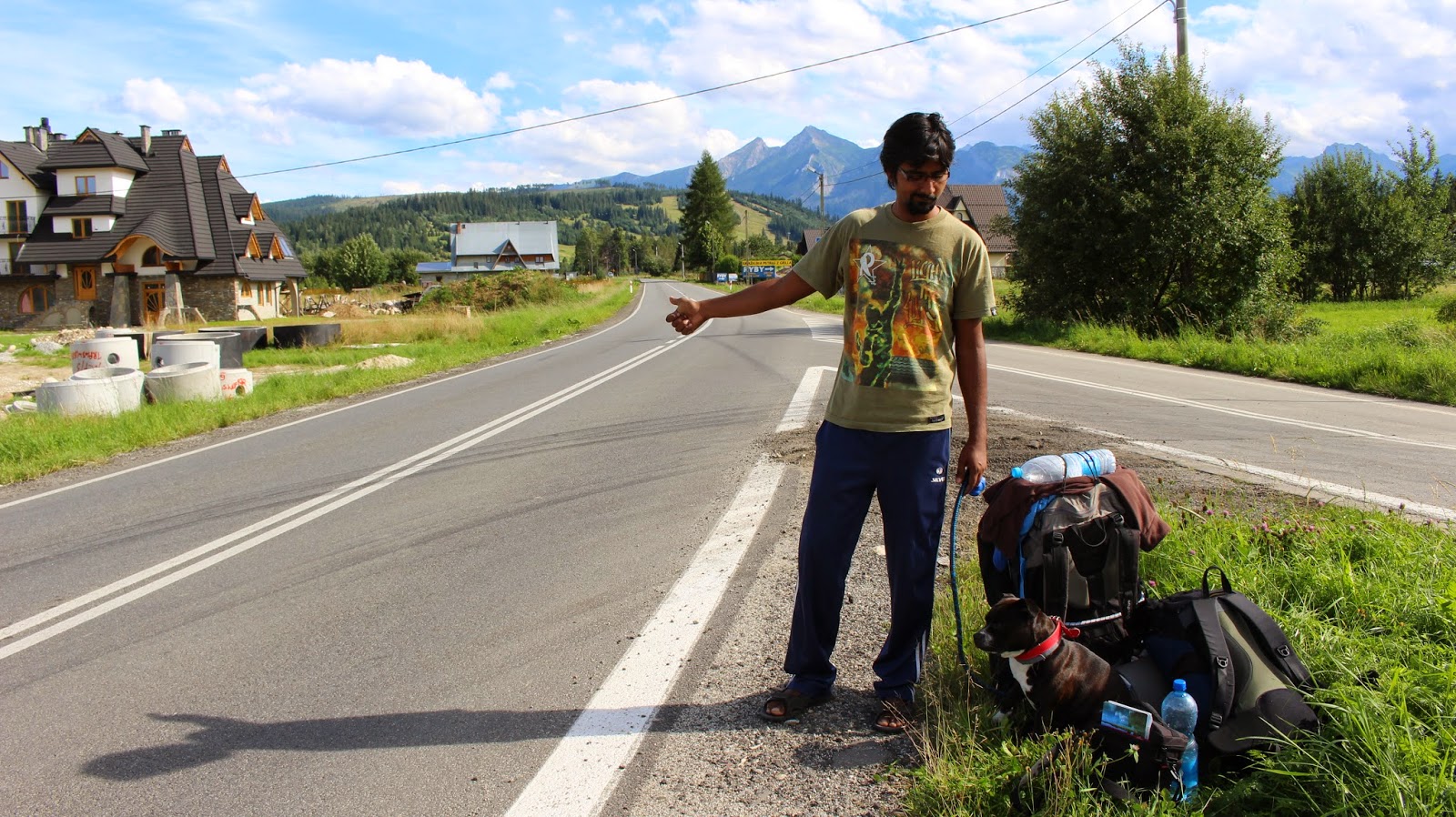 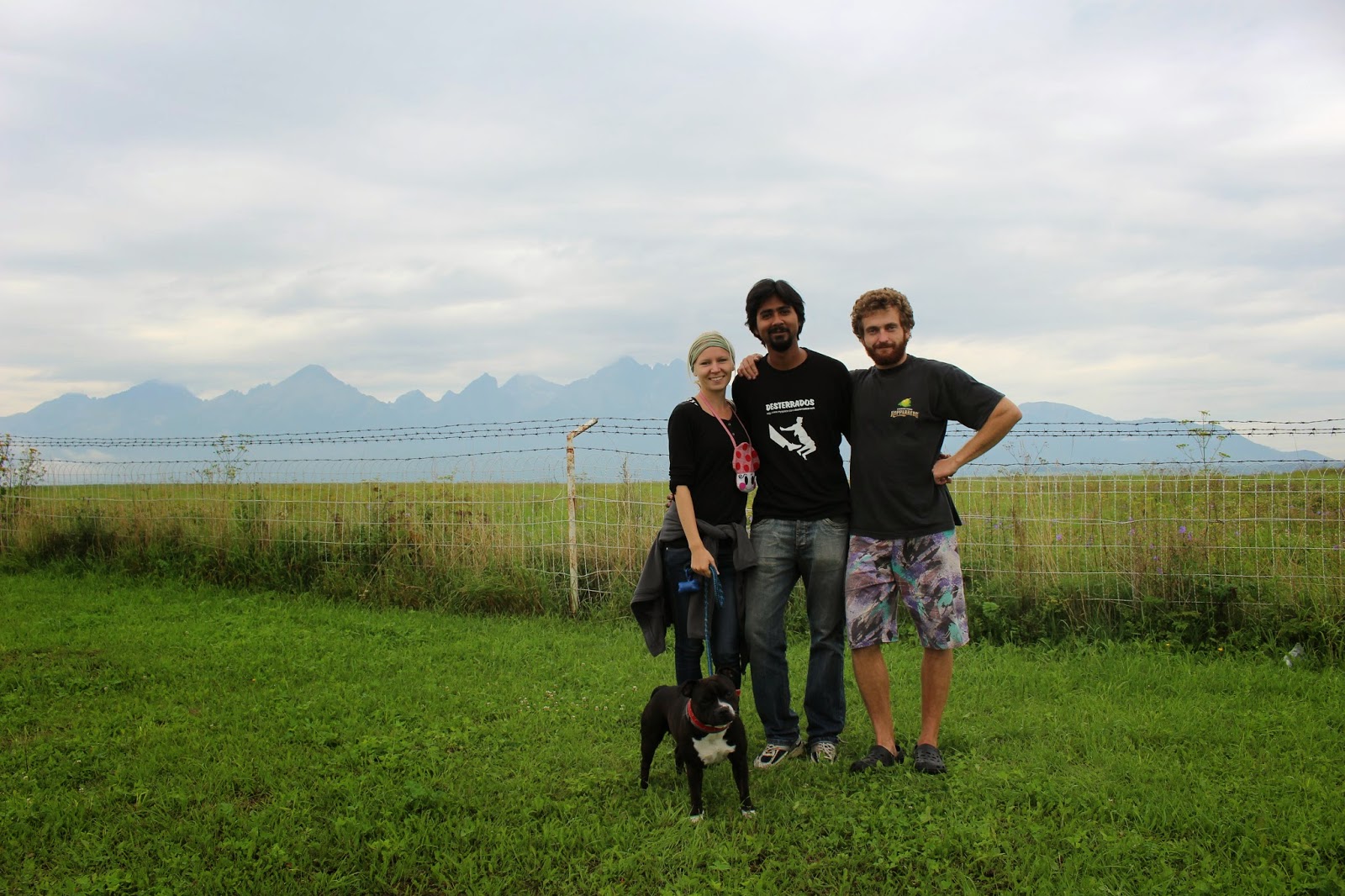 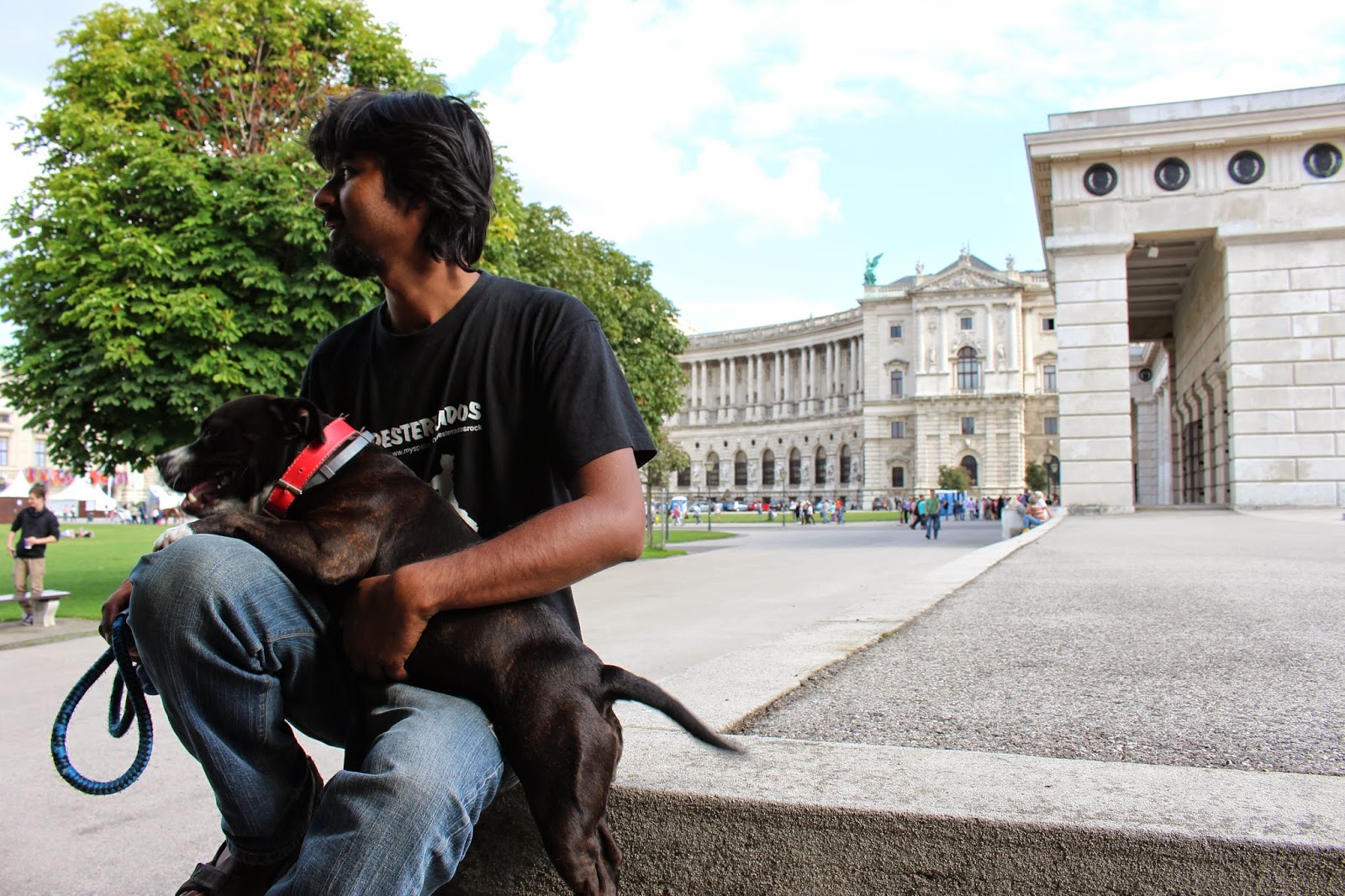 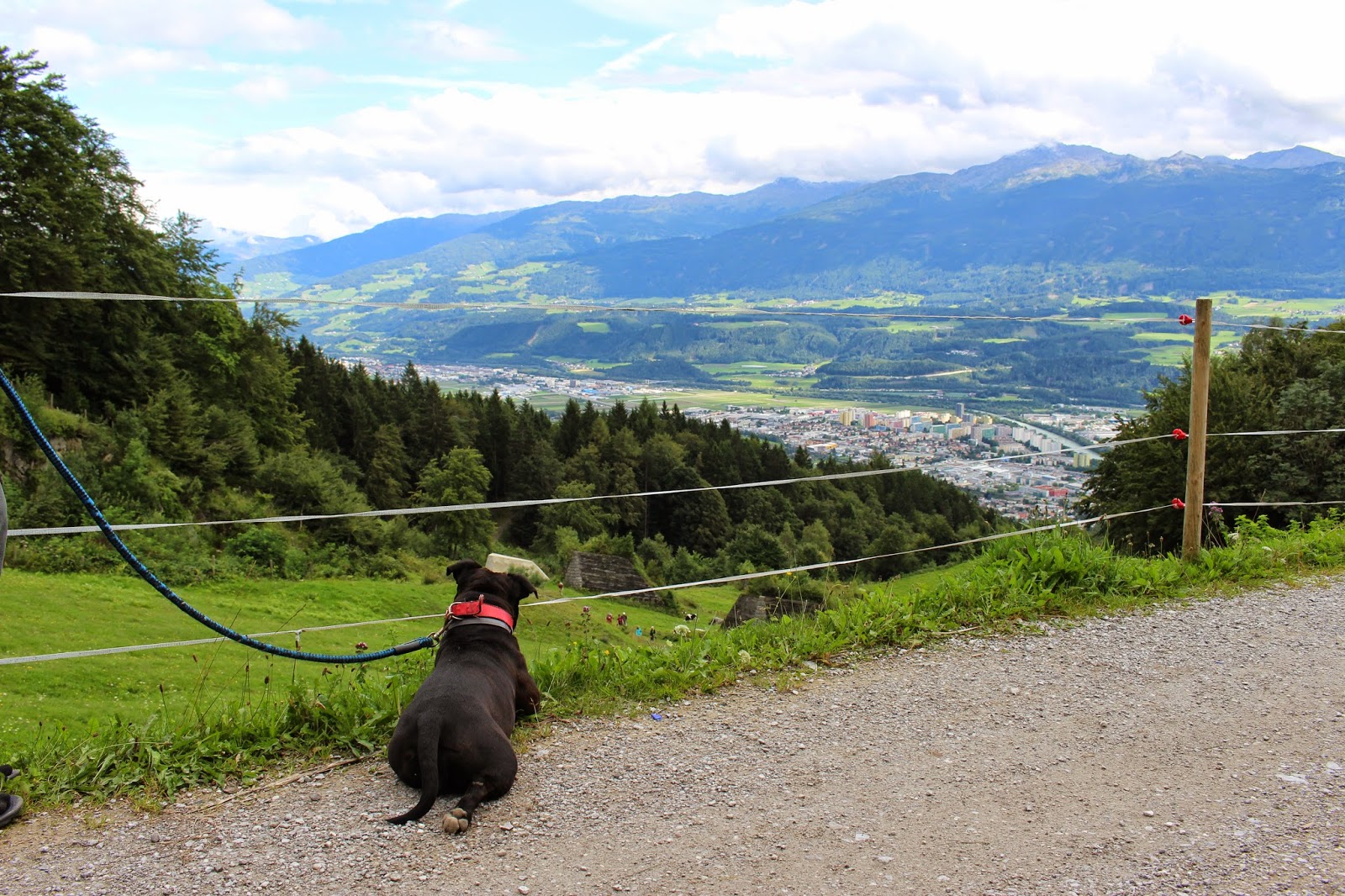 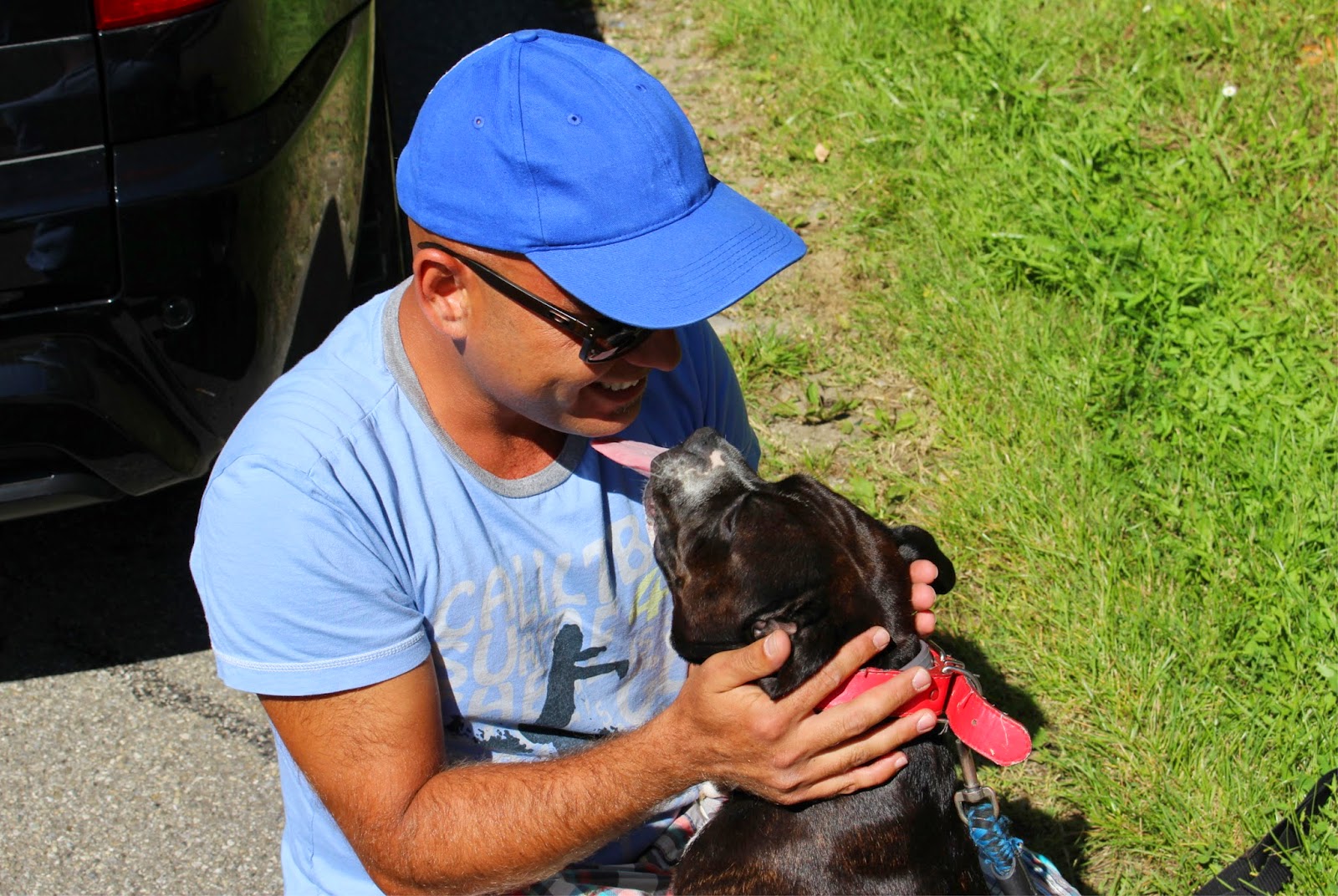 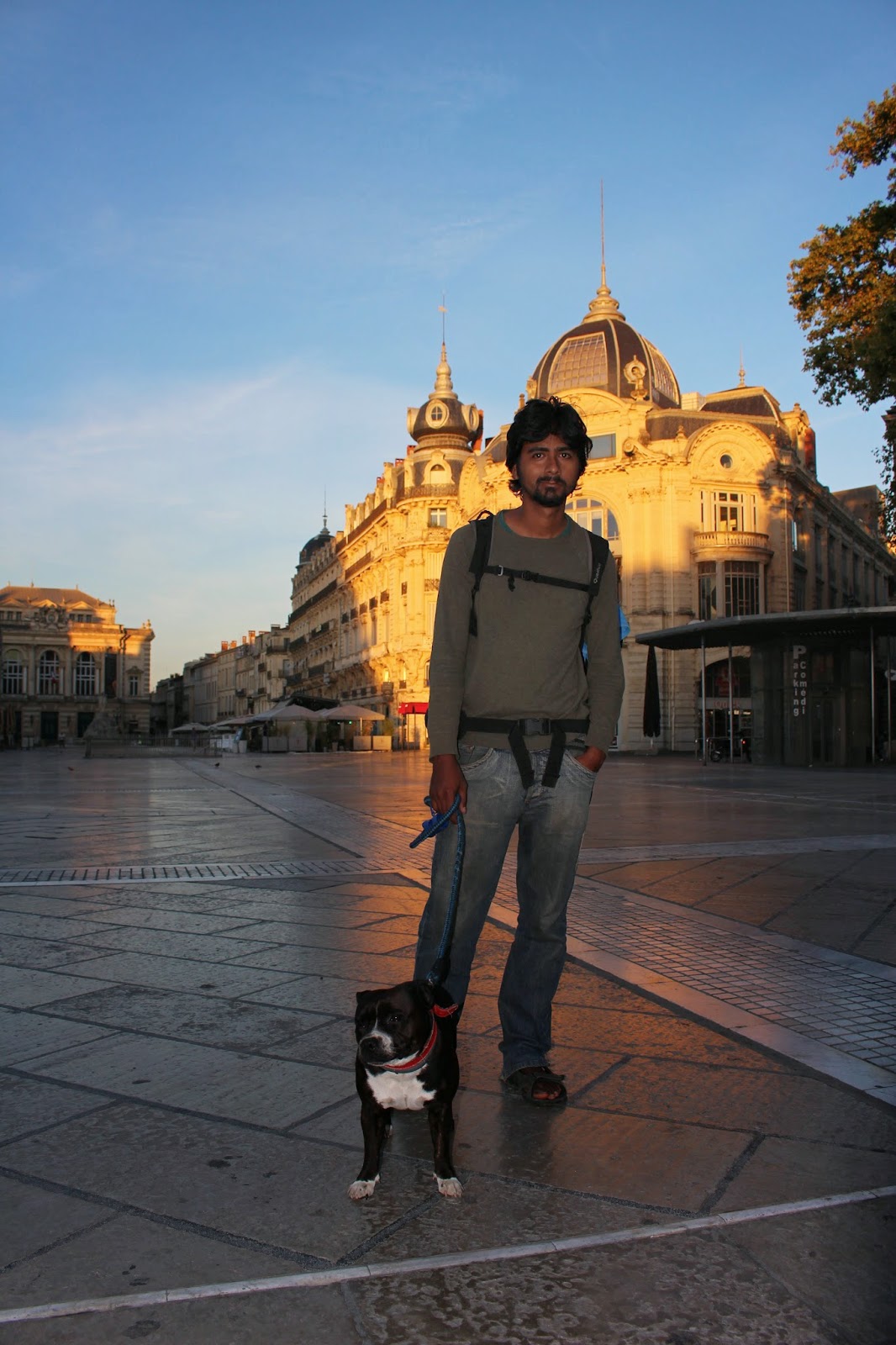 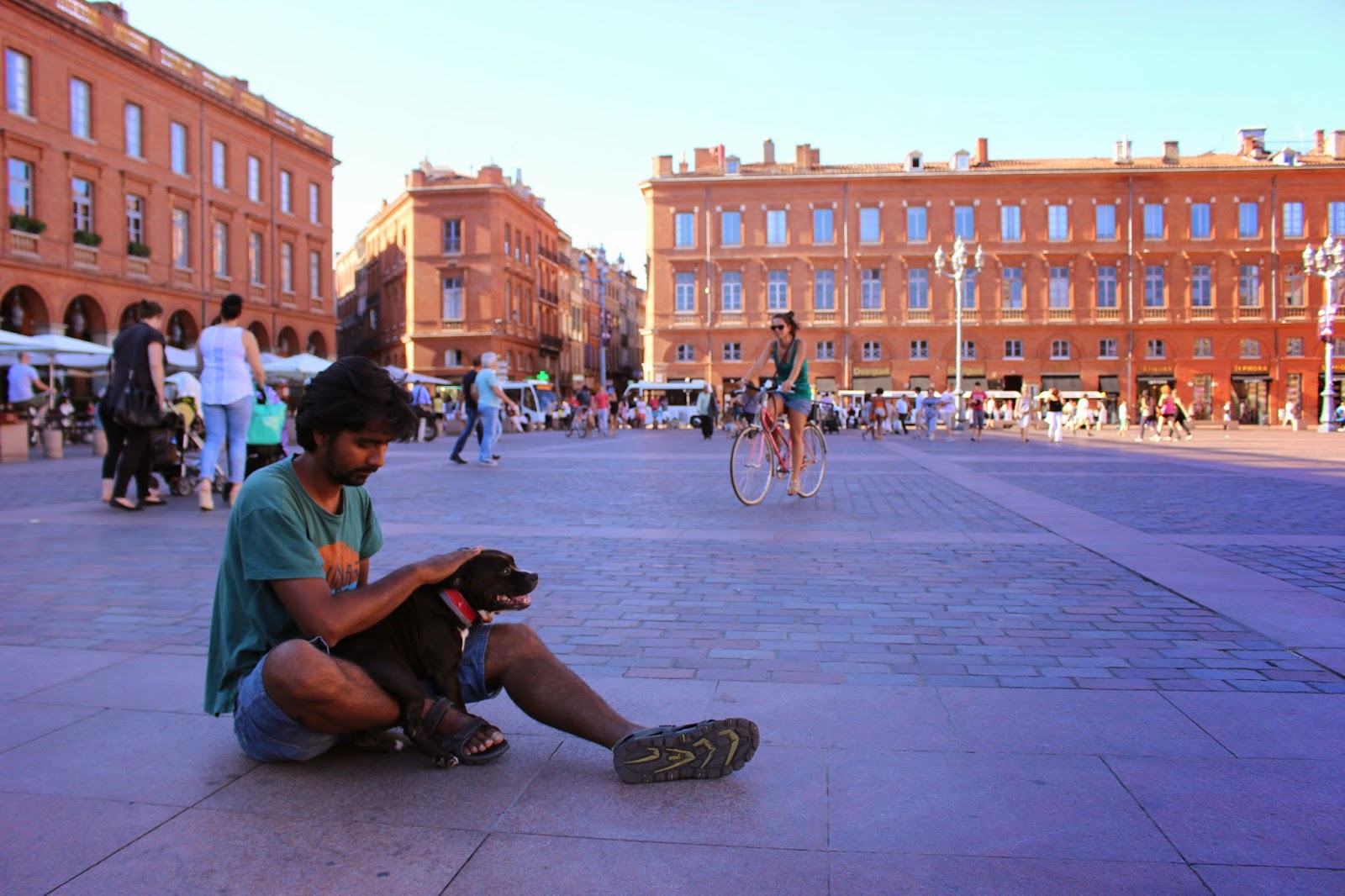 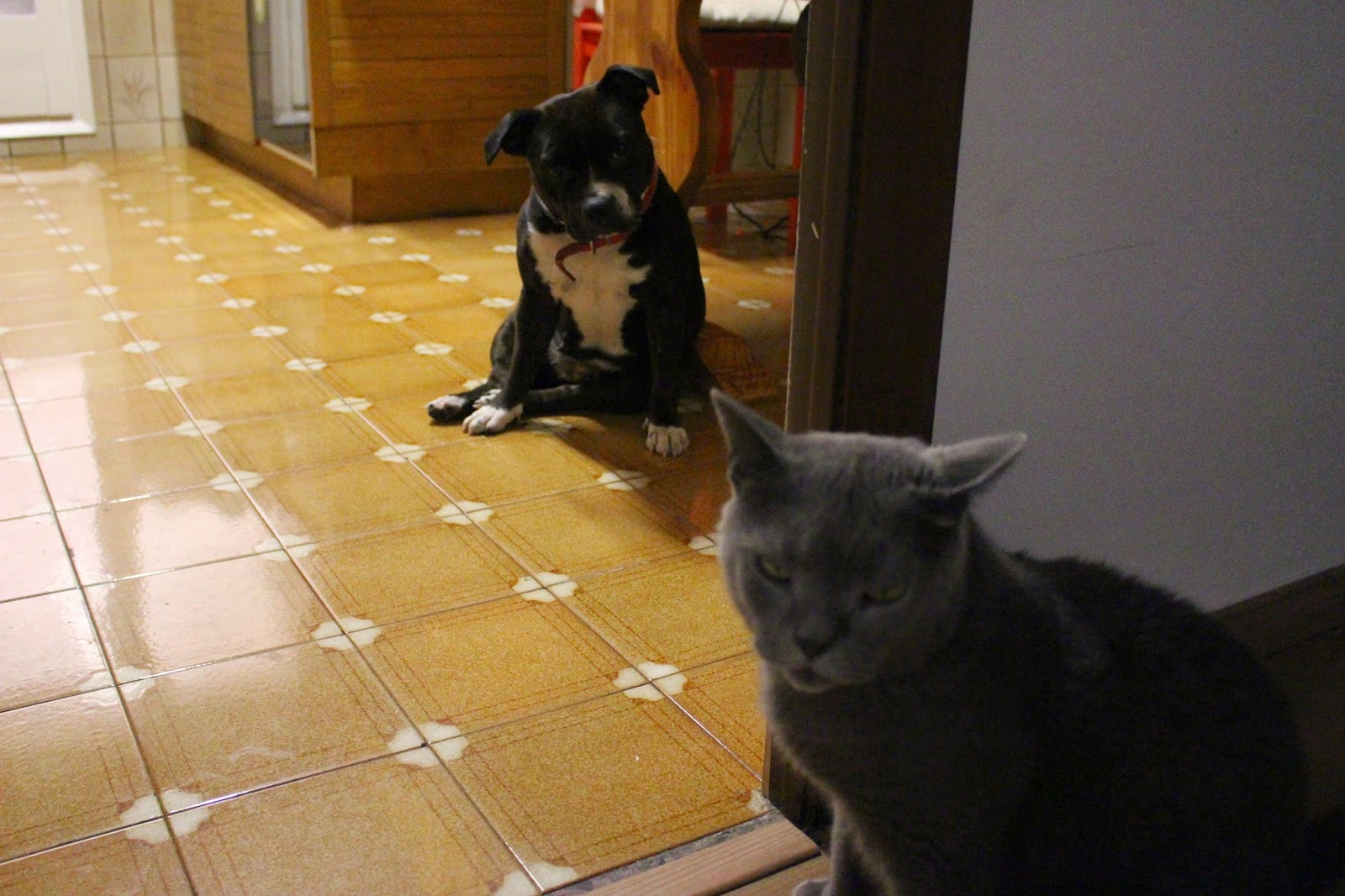 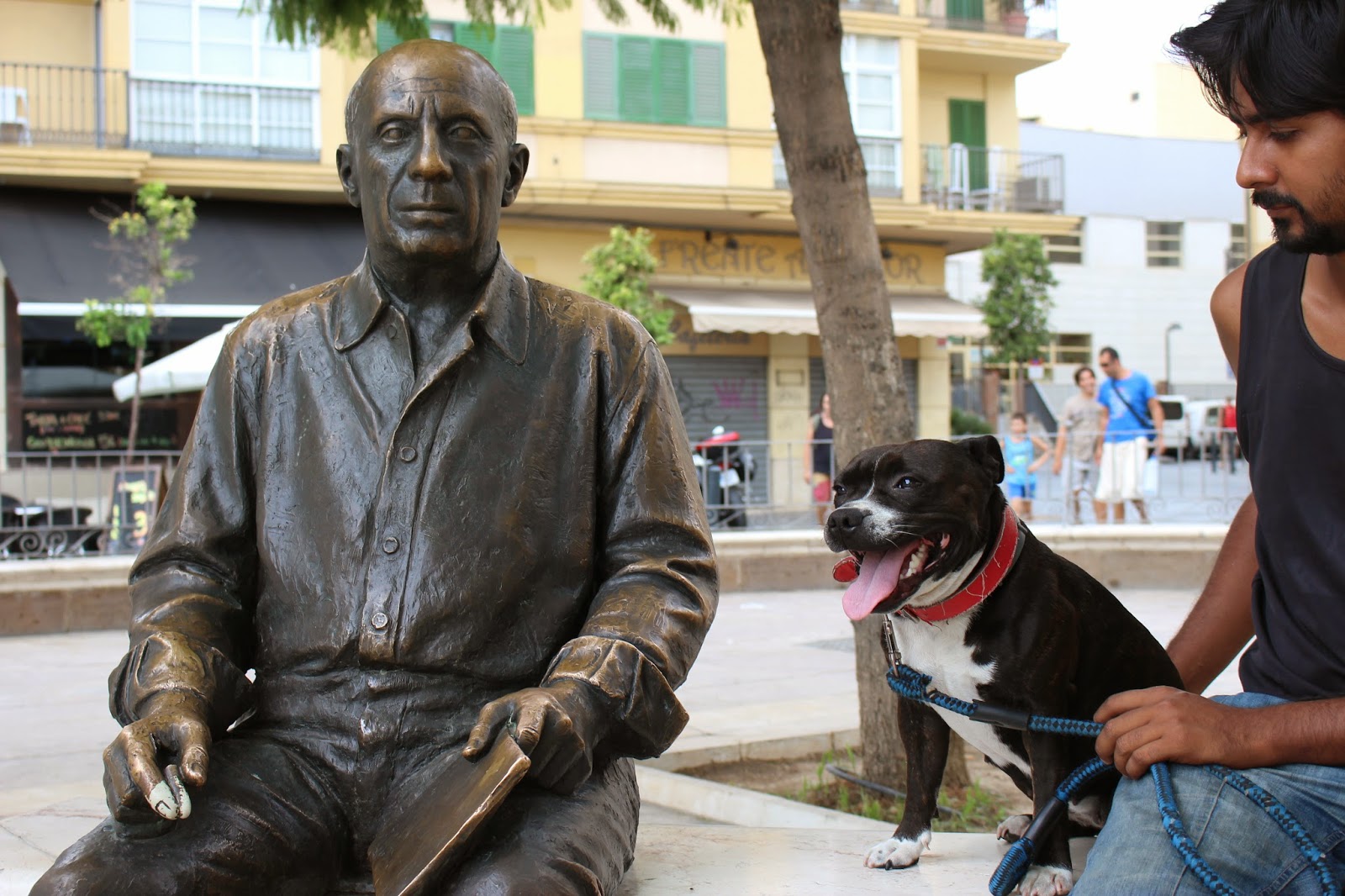 Patreon: The link will take you to Daniel's Patreon account where you can also see his other projects.

Paypal: You don't need a Paypal account for this, it also accepts credit cards: